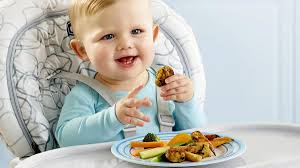 Baby‐led weaning (BLW) is a method of introducing solid foods to infants, which centres around the infant self‐feeding family foods. BLW has grown in popularity over the last 10 years; however, although research is starting to build around the safety and impact of the method, research examining intake is sparse. This is important because concerns have been raised by healthcare providers regarding the nutrient and energy sufficiency of BLW. The present study aimed to invstigate exposure to different food types based on different weaning approaches.

One hundred and eighty parents completed a 24‐h recall of the foods given to their babies aged 6–12 months. Respondents were split into those following strict BLW, loose BLW and traditional spoon‐feeding. Recalls were examined to ascertain the number of times in 24 h infants were given different types of foods, including iron‐containing foods. The results were then compared between different weaning groups and age groups.

Several significant differences were found between the frequency of foods eaten by different weaning and age groups: in the youngest age group, strict BLW infants were more likely to be exposed to vegetables (P < 0.001) and protein (P = 0.002) than traditionally weaned babies, whereas, at all age groups, the traditionally weaned group had the highest exposure to composite meals. However, no significant differences were found in reported exposure to iron‐containing foods between weaning groups at any age. Maternal age, education and milk feeding method were controlled for throughout the analyses.

The findings add to a growing body of evidence that suggest a BLW approach may be safe and sufficient.